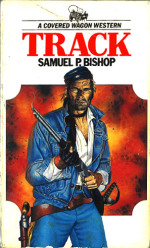 The American Civil War was over but the killing wasn't. In the bloody conflict, one man had honed his craft of killing as surely as the sabre he still carried. The man called Track. The land had cooled but he hadn't and he found that his lust for combat could be put to good use.

On the murderous trail of a vicious half-breed named Lone Wolf, Track discovers a burned out farm and just one survivor of the massacre.

A beautiful girl named Holly Fulton. A girl whose skill with a rifle almost matches his own.

They both want Lone Wolf dead but, to Track, the half-breed means money and not even a woman is going to stop him killing his quarry.

One driven by vengeance, the other by greed they find that they must fight side by side when Lone Wolf's tribe attack them and Track finds that he's not the only one who enjoys killing...

For most men the War has been hell, for Track it has been practice. 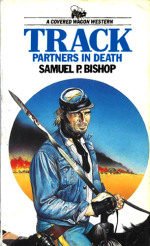 Some men killed because they had to. Track killed because he chose to. He made his living from death; the most ruthless bounty hunter ever to strap a corpse to a saddle. And now he was on the trail of gunman Jim Galton. Some said that Galton was innocent, that he'd killed in self-defence but all Track cared about was the 5,000 dollar bounty on his head. But he was not alone in his hunt. Holly Fulton had joined him again and, despite his threats, she looked like staying. She knew Galton was innocent but God help her if she got in Track's way. He'd kill anyone for 5,000 bucks. Man or woman. But, when the time came, Track found that he needed not only Holly's help but also the help of the man he was hunting.

Track had begun as the hunter but now he was the prey... 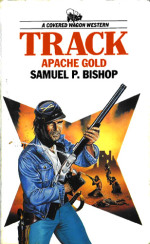 Valuing human lives as little more than a meal ticket, Track is still on the trail, four years after the Civil War. Far more than a soldier's pay can be earned from head-down over Track's saddle.

This time the ruthless bounty hunter has the gleam of gold in his eye. Prospectors like Frank Dawson found and lost more fortunes than most men. But, untroubled by conscience or compassion, Track follows no man's rules.

With a head of blond hair which would grace any Apache's lodge pole, Track resists the temptation of April Jacob's lithe body in his quest for higher reward.

Exacting a long overdue war debt from Colonel Taylor, he seizes the Apache war chief and sets out to pack his saddle bag with gold. The head count will be high, because killing is Track's business and business is good...